Let’s start with the face. Stable Diffusion (which you can use for free here) makes some excellent faces. In the game I’m playing right now, my character just ran across a teenage girl who turned out to be more powerful than she appeared; so the prompt I’m using for this experiment is:

Those last two words are crucial for the vibe I want. Stable Diffusion came up with a couple of options (you can click any of the images in this post to get a bigger version):

(From left to right: a bit too old for the character, one too many limbs, beautiful but the wrong type of magic, too much…eye (?!?), and do they even have fluoride in this setting?) 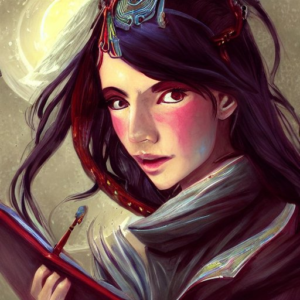 The face is great. Her scarf is a little weird, I think it’s odd how it’s not sure whether she’s got flowing hair or a hood on her right side, and I guess…is that a book light on her magic spellbook?

But it’s a great start, and if all goes well, those little weirdnesses will be less visible because I’m going to enlarge it. Stable Diffusion doesn’t do outpainting yet, at least not in the demo environment I’m using, but DALL-E 2 does. I’m going to enlarge the canvas in Paint.NET, and upload it for some outpainting. Here’s the results from the first iteration: 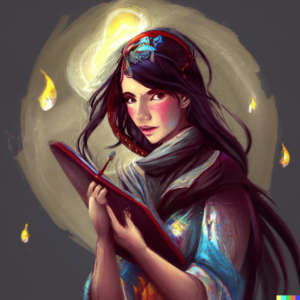 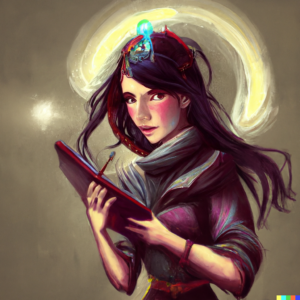 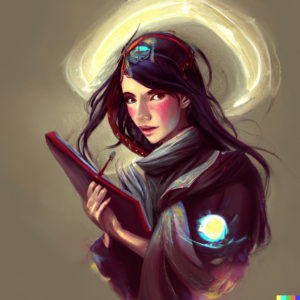 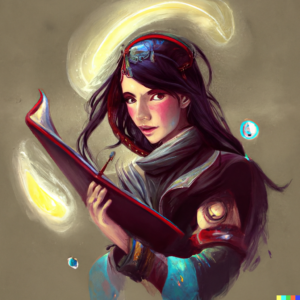 I love all of these, especially how they all have a slightly unique take. I’m going to continue working with the first one; her hand is a literal ham, but that background is cool. I especially like the sparkling flames flying around her. Let’s try turning this from a medium shot into a medium full. Enlarge the canvas, reupload, erase the ham so it generates a new hand there, and here’s the second iteration: 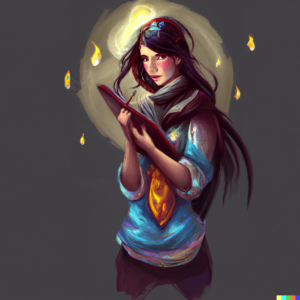 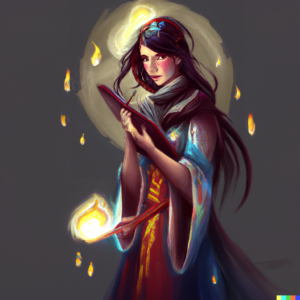 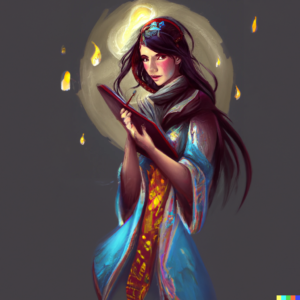 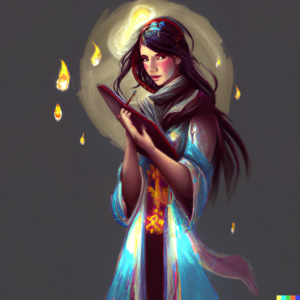 Ahh! How did I not notice in the previous shot—her upper arms are WAY too long!  Still, DALL-E 2’s work on her clothes in each iteration is really unique. The sparklies are awesome, as expected, and so is the halo around her head.

(Incidentally, at one point I screwed up the outpainting tool and ended up creating four new images in Dall-E with the same prompt. The results were…well, they were indeed interesting. For some reason, DALL-E 2 has trouble with the “fantasy art” genre.)

But back to our sorceress; we have to do something about those arms. My second favorite from the first iteration is #2, so let’s make a second iteration from that image: 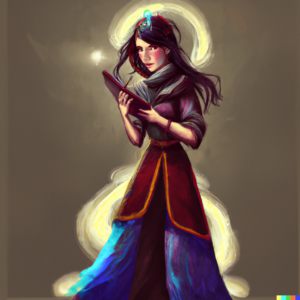 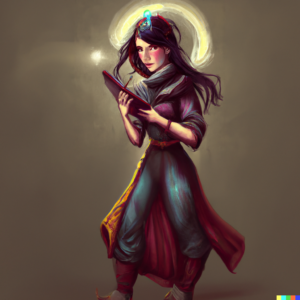 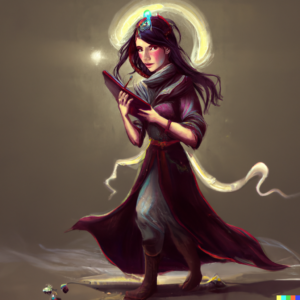 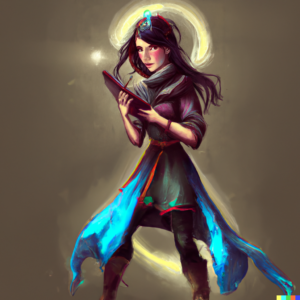 NOW we’re talking. The first one is a bit too Mulan for what we’re going for, and the fourth one seems like the artist phoned it in on for the bottom half. But numbers 2 and 3 are AWESOME. Meet Helena Morrigan, human elementalist wizard: 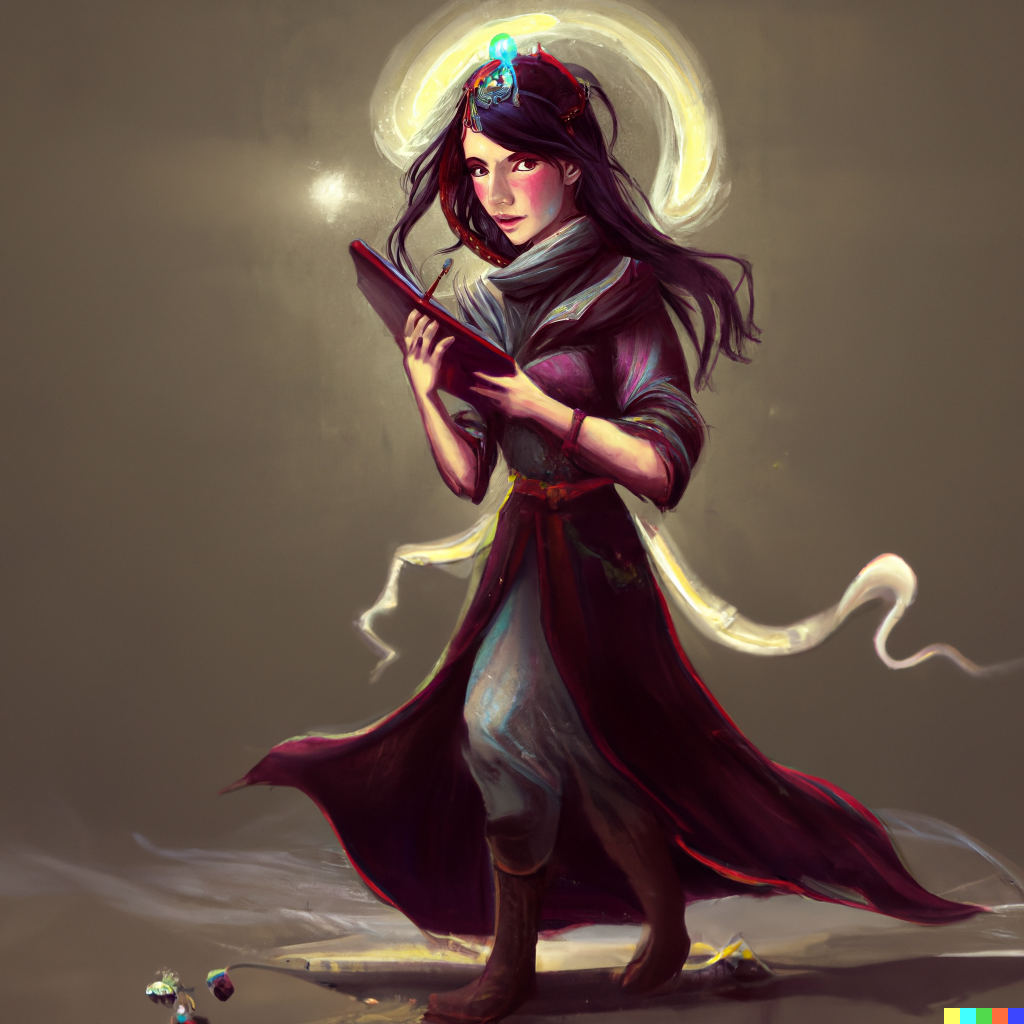 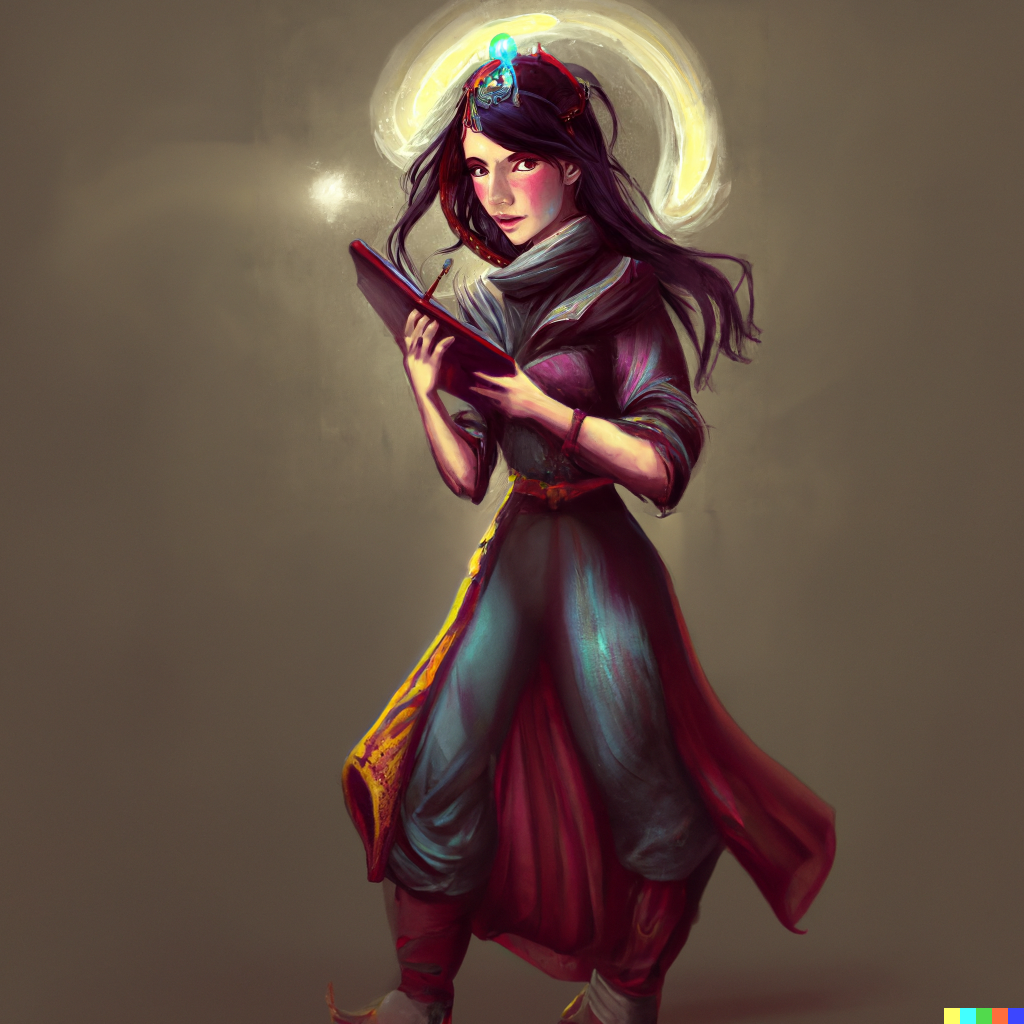 Maybe I’ll even stat up a PF2e character sheet for her; but either way, that was fun. I’m gonna do that again.