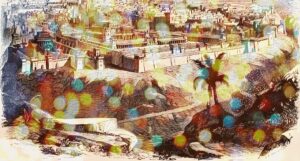 On the first step, he stood—

Zerubbabel looked from the temple step, his eyes scraping over the tattered remnants of Jerusalem, but his ears inundated with the sounds of the exiles of Israel all around him. Two years returned, they clashed their cymbals with delight, invoking God’s promise: “The Lord is good; his love endures forever!” Their shouts swelled from the mountain and hope swelled in his heart, for though the temple was still little more than a foundation and an altar, the Lord would live among His people once more.

On the second step, he climbed—

Joshua, son of Jozadak, strode up to the temple to offer the sacrifices that would finally dedicate it as the place where the Lord would speak. Though its pinnacles were not as high nor its walls as sparkling as its predecessor, and though it had taken them decades to lay the final stone, his heart glowed with peace and resoluteness. Surely this time Israel would retain their fervor, and not be taken into exile again. The walls would still reverberate with the people singing “the Lord is good, His love endures forever!”

On the third step, he sat—

Malachi slumped, his shoulders rounded and head bowed with the weight of frustration. Barely one lifetime had passed since the last echoes of Israel’s promise of unending devotion had faded across the temple grounds. “The Lord is good, His love endures forever,” but His people forget and turn away so quickly. Crying out the words God whispered to him, Malachi implored Israel to return, but they shut their ears to him. His call to repentance hung in the air, the vanishing echoes of God’s last words for half an age before silence fell.

On the fourth step, she wept—

Anna, barely twenty and already a widow, carried the sharp-edged pieces of a broken heart; a barren woman climbing barren steps. Her ears and all the ears of Israel ached at the silence in the temple over the past four centuries, but this was still the only place she knew to come with her distress. The promise had long ago been made that “the Lord is good, His love endures forever,” so Anna came in the quiet and began her vigil.

Down the fifth step, he ran—

Zechariah dashed down the temple steps to his wife with a tangle of joy, fear, awe, and confusion. The Lord had shattered His long silence with a message for the two of them; one of hope and joy, that a son would come to them, to speak for God once more, to prepare the way for the salvation of all of Israel! Their disgrace was over! Zechariah had been silenced, but God renewed the promise through the old man’s shuffled steps that “The Lord is good, His love endures forever.”

A young woman and her new husband approach the temple steps with a swaddled baby in her arms:

She steps on the fifth step with the Word of God, made flesh to dwell among us—

And atop the stairs of the temple, the people of God cry out: “The Lord is good, His love endures forever!”

My wife and I collaborated on this meditation for a collection of works compiled by our church for the Advent season.