Act I: The Good Old Days 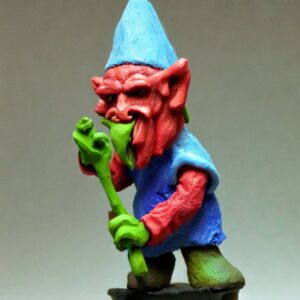 In the far-distant year 2000, gaming company Wizards of the Coast (publishers of Dungeons and Dragons, among other things) published the third edition of the popular role-playing game. Along with the new rules, they made what would become a watershed decision in the hobby: releasing certain parts of their system under a license called the Open Game License (OGL). This allowed third parties to develop RPG elements that were interoperable with D&D simply, to legally use elements of the official game itself, and to publish even big additions or modifications to the game without worrying about Wizards of the Coast descending upon them with lawyers demanding a cut.

Over the last 22 years, the OGL has been used for a lot of great gaming content: video games (including the beloved Star Wars video game Knights of the Old Republic), board games, card games, a massive number of D&D modules and adventures, and even whole new role-playing games such as the Lord of the Rings RPG Adventures in Middle-Earth, and my personal favorite, Paizo’s Pathfinder and Starfinder games. It wouldn’t be a great stretch to say that a very large percentage of the RPG hobby is built on the OGL.

Not that everything has been perfect this whole time. In 2008, the fourth edition of D&D came out; but it was released under a more restrictive agreement called the Game System License (GSL). This was widely considered a bad move, and may indeed have contributed to that edition’s failure in the market. But the OGL remained in place for the previous version of the game, leading a sizable percentage of their third party creator base to continue creating content that was compatible with D&D 3.5, the final version of the game released under the original version of the agreement. Notably, third party publisher Paizo released the first edition of their well-loved alternative system Pathfinder, an updated and expanded ruleset of 3.5, under the OGL during this time. For a while during this time, Pathfinder actually eclipsed D&D as the best-selling tabletop RPG in the industry.

When Wizards released the fifth edition of D&D in 2014, they returned to and updated the OGL agreement, placing the new 5e rules under version 1.0a of that license.

And then things exploded.

Act III: A Rise to Dominance

But some combination of all these things contributed to bringing D&D to the public consciousness again; and the popularity of the relatively-new fifth edition, coupled with its accessible ruleset, led to a huge increase in D&D players, causing the game to regain its top spot, blowing past all previous records, and even lifting the number of players of all RPGs in the industry.

A good deal of this growth was buoyed by the OGL, as Dimension 20, Critical Role, and MCDM in particular utilized the license agreement to avoid legal trouble for their adaptations of their games and their add-on supplements that allowed fans to play with their rules at home, all the while increasing Wizards of the Coast’s bottom line.

Alas, but this golden age could not last.

In August of 2022, Wizards of the Coast began the playtest for OneD&D, the next edition of the game. While it was underway, the text of a version 1.1 of the OGL leaked; first rumors began to roll out, then on January 5, 2023 the text leaked to tech news site Gizmodo, and then it was everywhere.

It’s pretty bad. The new agreement makes a division between paid and free content, and claims royalties for income over a certain total amount, for instance. It may even give Wizards of the Coast license or even copyright rights to third party work. But perhaps most unbelievable of all, it attempts to invalidate the old agreement; something that former Wizards of the Coast executives say shouldn’t be possible.

The response has been immediate and overwheming. “#openDND” began trending on both Mastodon and Twitter, easily overtaking the #oneDND hashtag that Wizards of the Coast had been pushing for the playtest of its new version. People are understandably upset about the possible torpedoing of their favorite worlds. Comparisons to the failure of 4th edition and the GSL were made almost immediately. Lawyers in the hobby (of which, perhaps unsurprisingly, there are many) are saying almost unanimously that this is probably not defensible but would be very expensive to challenge.

On January 10, a comical five days after the initial leak of the new agreement, the Twitter account for the player tools for the game, D&D Beyond, posted “We know you have questions about the OGL and we will be sharing more soon. Thank you for your patience.“—which, of course, went over like a lead balloon; since after five days people don’t have questions, they have opinions and concerns and even demands. The official D&D has yet to address the issue, beyond retweeting the D&D Beyond post.

Perhaps more interesting, though, has been the reaction from the third party D&D community themselves. In no particular order:

Also, some brands that are likely bound by NDAs not to comment on the OGL but still have strong opinions have made some moves: 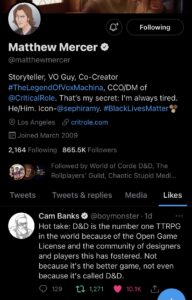 Then, there are the third party publishers who are starting their own games, with unicorns and rainbows and no OGL at all:

Since I originally published this article, there have been a couple of other major, notable moves in the industry! To wit: there are a couple of broader moves afoot to supplant the OGL entirely.

It’s tough to tell what the future holds for D&D, the OGL, and the Tabletop RPG (TTRPG) hobby in general. But clearly this has blown up in Wizards of the Coast’s face: they attempted to make “OneD&D” a more restrictive fourth edition, and it really looks like they’re doing it…with all the worst parts. The fallout is creating a million individual Paizo-like competitors, and undermining their de facto chokehold on the entire industry.

Their miscalculation was in assuming that the rules where what their player base loved. But even the biggest “grognard” Dungeon Master cares more about his world than about the ruleset. Nobody cares about the ruleset, in fact; people play D&D for their party, for their friends, for their character, for the world, and for the story (and maybe for the name “Dungeons and Dragons“) but not for the rules, which is really all Wizards of the Coast has to offer.

As a result, I think the Dungeon Masters who care about their worlds are going to hold onto the D&D rules much more loosely going forward, and publishers are going to be much more gun-shy about hitching their wagons to any horse they don’t have control over in the future. Fragmentation and competition is going to overtake the unity that was once a big part of the D&D world.

In essence, the loose unification around the D&D rules that the OGL facilitated is going to fall apart now; leaving Wizards of the Coast simply one of the many game developers making content, rather than the “Dungeon Master” at the TTRPG table. This is terrible news for Wizards of the Coast, because they release books infrequently; and the ones they do release are received quite tepidly. Their generic and basic game setting doesn’t stand a chance against the more colorful and adventurous worlds that exist. All they have now is name recognition and marketing dollars, which may not take them very far.

In short, like social media, tabletop role-playing games appear to be federating. Which is great news for the hobby…but terrible news for Wizards of the Coast.

Update 12 January 2023: And if a third-party behemoth like Paizo is on board, as seems to be the case, we may truly be seeing Wizards of the Coast fumbling their market share just like they did in 2008. It begs the question: if Pathfinder rises to dominance again, will Dungeons and Dragons even survive under their current, profit-at-all-costs owners?